At today’s Annual General Meeting in Strax AB (publ) it was resolved to adopt the income statement and the balance sheet for the company, as well as the consolidated income statement and balance sheet for the year 2020. Furthermore, it was resolved that the distributable funds should be transferred to profit carried forward. The Annual General Meeting resolved to discharge the board members and the CEO from liability.

The Annual General Meeting approved the Board of Directors’ proposal regarding remuneration report.

It was further resolved, in accordance with the proposal from the Board of Directors, to authorise the Board of Directors to, up until the next Annual General Meeting, on one or several occasions and with or without preferential rights for the shareholders against cash payment or against payment through set-off or in kind, or otherwise on special conditions, to issue new shares, warrants and/or convertible bonds. However, such issue of shares must never result in the company’s issued share capital or the number of shares in the company at any time, being increased by more than a total of 10 per cent. The previous authorisation to issue new shares and which was given at last year’s Annual General Meeting, was valid up to this year’s Annual General Meeting and has consequently lapsed.

The information was submitted for publication, through the agency of the contact person set out above, at  5:00 pm CEST on 26 May 2021.

About Strax
STRAX is a global leader in accessories that empower mobile lifestyles. Our portfolio of accessories brands targets broad channel scope as well as different customer demographic and covers all major mobile product categories: Protection, Power, Personal Audio and Connectivity. In response to the ongoing pandemic, STRAX pivoted into Health & Wellness products, with an initial focus on personal protection equipment, such as face masks, gloves and sanitizers. Our success lies in a strong offline and online distribution network and best-in-class customer service, delivered by a stellar team.

We develop and grow brands through an omnichannel approach, and we operate two complementary businesses: Own brands – including Urbanista, Clckr, Richmond & Finch, Planet Buddies, xqisit, AVO+, and licensed brands such as adidas, Bugatti, Diesel, Superdry and WeSC – and Distribution (traditional retail, enterprises, and online marketplaces). In addition to own and licensed brands, STRAX distributes over 40 major mobile accessory brands and several Health & Wellness brands with an initial focus on personal protection equipment. We sell into all key sales channels ranging from telecom operators, mass merchants and consumer electronics to lifestyle retailers, large enterprises and direct to consumers online.

Founded in Miami and Hong Kong in 1995, STRAX has since expanded worldwide. Today, we have over 200 employees in 13 countries, with our operational HQ and logistics center in Germany. STRAX is listed on the Nasdaq Stockholm stock exchange. 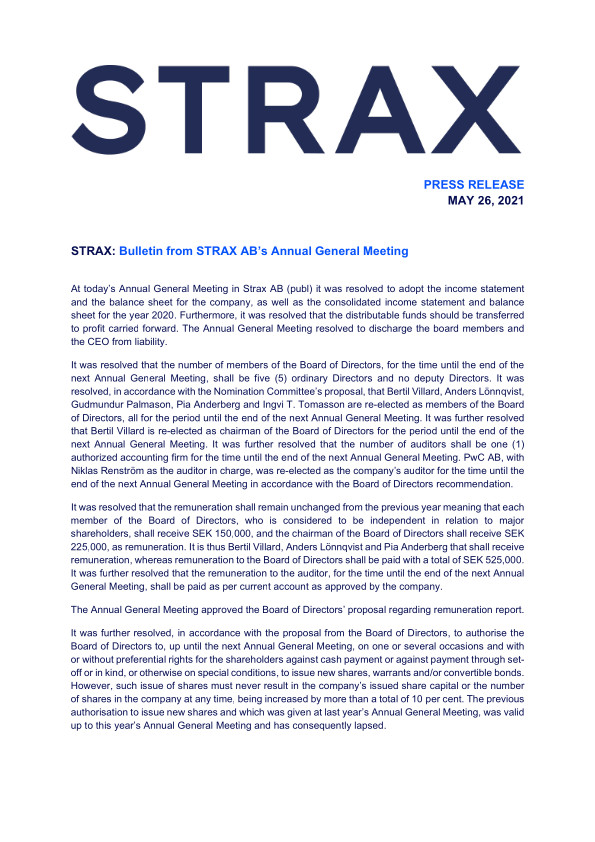